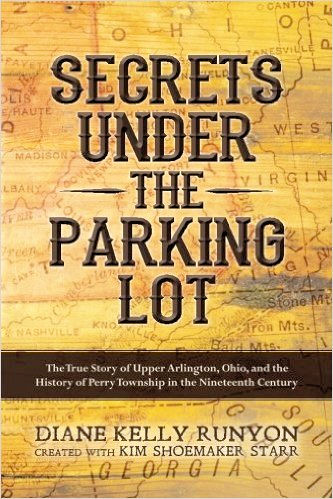 Secrets Under The Parking Lot: The True Story of Upper Arlington, Ohio, and the History of Perry Township in the Nineteenth Century

Pleasant Litchford and his family were ex-slaves who settled in the Perry Township of Franklin County in 1832. There the family struggled alongside other pioneers to establish a home in the Ohio wilderness. Although Pleasant died a wealthy landowner, a millionaire in today’s economy, his legacy and those of many other people of color have been buried.

Secrets under the Parking Lot explores the history of what is now Upper Arlington, Ohio, focusing on the truth found in original documents such as maps, land deeds, and records of lawsuits. It tells the interwoven story of many families in the area and how the township developed.

Early in the twentieth century, there was a social shift in the community that mirrored the national climate. Policies were put in place to exclude people of color from land ownership in attempts to create all-white neighborhoods and communities. In 1955, the Litchford family graves were moved across town to Union Cemetery, where they now lie with no gravestones.

Although the Civil Rights Act of 1964 made these exclusionary policies illegal, their effects linger in society today. Honoring those who have come before means acknowledging the truth of history, even in the face of attempts to cover it up.

Diane Kelly Runyon is a member of the Association of Professional Genealogists and the Ulster Foundation in Northern Ireland. Diane was a teacher for thirty years and was awarded Ohio History’s Teacher of the Year in 2012. History is her passion and she is a scholar in Irish genealogy. She continues her post graduate studies in early American life at Yale University. As a lifelong historian, she studies the lives of those who have gone before us. She is the owner of Lineage Links LLC, a genealogical and historical research firm. Diane lives in Worthington, Ohio.

Kim Shoemaker Starr, a gravestone restoration specialist, is the owner of Shine On with Love, a grave-site care company. She has restored headstones in cemeteries across the United States, including Davis Cemetery in Upper Arlington, receiving statewide and national recognition. In 2016 Starr received the Historic Preservation Recognition Award. She is a member of Colonial Dames. Kim was born, raised, and lives in Upper Arlington.

Both are members of the Daughters of the American Revolution.